Each week, we provide an overview of the percent returns of the primary indices in Southeast Asia and their currency appreciation or depreciation relative to the US Dollar.  We provide this information below.  We also capture this information, as well as the trailing four and twelve week movements, and plot the data in charts, which you can find on the “index charts” and “currency charts” pages.

During the week of 15 May, which saw United States markets experience their greatest daily loss since September, several Southeast Asia indices advanced.  The Jakarta Stock Exchange (JSX) reversed earlier losses in the week to lead all indices with a gain of 2.06%—it climbed 2.59% on Friday, possibly in part because Bank Indonesia voted on Thursday afternoon to hold the seven-day reverse repurchase rate at 4.75%, according to the Jakarta Globe.

Trading this week on the Lao Securities Exchange—which had the greatest decline of the nine indices—underscored the volatility that can surface in emerging markets, with the LSX jumping 7.92% on Tuesday, only to fall 7.66% the next day.  The price movements in the LSX over this two-day period primarily were driven by EDL-Gen, a state-owned energy company, which gained 9.6% on Tuesday and fell by almost an identical percent on Wednesday. 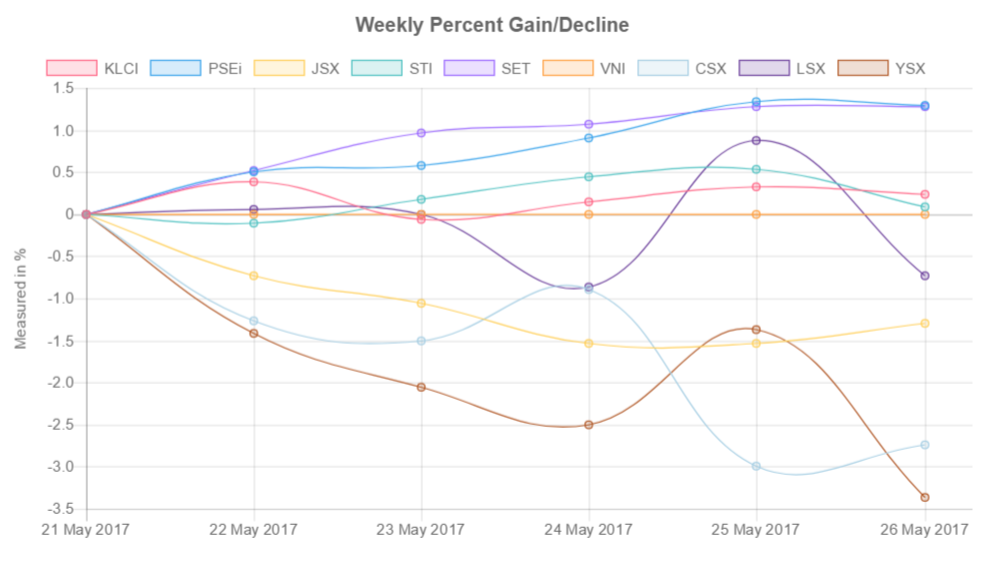 During the week of 15 May, five of the primary Southeast Asian currencies appreciated relative to the US Dollar, with the Singapore Dollar (SGD) leading all advances at 1.37% and the Myanmar Kyat seeing the greatest decline at 1.06%, brining its trailing twelve-month depreciation relative to the USD to 15%.

Analysis in Your Inbox